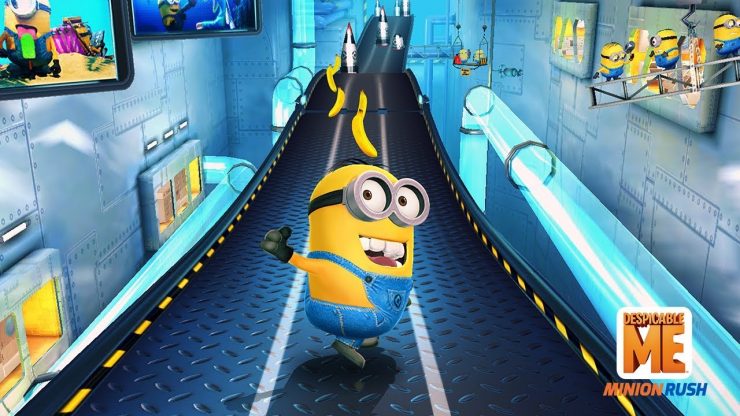 The “Minions” franchise is one of our favorites and the “Gameloft, Illumination and Universal Pictures” game becomes the first movie-inspired mobile game to reach 1 billion downloads and join the exclusive circle of games for mobile devices to reach this mark.

Find out what this game is about and why it is so popular below.

Paris, France, June 2, 2021 – Gameloft, a leader in the creation and publishing of games, in collaboration with Illumination and Universal Games and Digital Platforms, is pleased to announce that Minion Rush, the mobile game inspired by the Despicable Me franchise from Illumination and Universal Pictures, has reached more than 1 billion downloads on iOS, Android and other compatible devices. In the eight years since its release, Minion Rush has become one of the most popular and downloaded mobile games of all time and is also the first motion picture-based mobile game to achieve this milestone.

Released on June 10, 2013, Minion Rush offered fun and accessible runner game with the signature antics and subversive humor of the Minions. Over the past eight years, users continued to experience fresh content and new features introduced on a regular basis. To date, fans have collected 90 billion bananas and completed more than 216 billion miles of running in the game, for a total of 3.4 billion hours spent playing the game.

To celebrate, the team behind Minion Rush is launching the Celebration Event, a commemoration starting June 2, 2021, where players will work together to collect 33 billion in-game bananas, to unlock a very special Minions costume. It also announces the long-awaited and requested introduction of two new Minions, Bob and Stuart. You can find more information about the event here.

“That’s right, with an ‘M!’ Like BILLIONS of downloads, ”said Stas Sadkeyev, Minion Rush Game Manager at Gameloft Kharkiv. M as in a billion players. We are honored to be such an important part of Minions history, speaking and interacting with players and fans around the world. Games rarely reach this mark and everyone here at Gameloft is honored to have achieved it. ”
“This remarkable milestone is a testament to the strength and longevity of this franchise and to our close collaboration with the Gameloft and Universal teams,” said Chris Meledandri, Founder and CEO of Illumination.

“When we partnered with Gameloft to create a Minions game for fans, we knew it was going to do something special because of our shared ambition to bring a thoughtful, authentic and humorous experience to market,” said Jim Molinets, SVP of Production. , Universal Games and Digital Platforms. But reach a billion downloads? That’s just something Gru would aspire to! The game’s tremendous growth and success since 2013 has truly been fueled by fan loyalty and appreciation, and we will continue to entertain our players as they deepen their connection to the beloved franchise.

A leader in game development and publishing, Gameloft has established itself as one of the leading innovators in its field since 2000. Gameloft creates games for all digital platforms, two of which are listed in the “Top 10 iOS Games by All-Time Worldwide Downloads ”from the Annie app. Gameloft operates its own established franchises such as Asphalt, Dragon Mania Legends, Modern Combat, and Dungeon Hunter and also partners with major rights holders including Disney, LEGO, Universal, Illumination Entertainment, Hasbro, Fox Digital Entertainment, Mattel, Lamborghini, and Ferrari. Gameloft distributes its games in more than 100 countries and employs 3,600 people around the world. Each month, advertisers can reach 70 million unique users on Gameloft games with Gameloft for brands, a leading B2B offering dedicated to brands and agencies. Gameloft is a Vivendi company.

Founded by Oscar nominee Chris Meledandri in 2007, Illumination is one of the entertainment industry’s leading producers of event animation films, including Despicable Me, the most successful animated franchise in film history. . The company’s premieres include two of the top 10 animated films of all time, and its iconic and beloved franchises, infused with memorable and distinct characters, global appeal and cultural relevance, have grossed more than $ 6.25 billion worldwide. world.

Illumination, which has an exclusive financing and distribution partnership with Universal Pictures, is the creator of the world of Despicable Me Gru. The franchise includes Minions, the fourth-highest-grossing animated film of all time and the highest-grossing film in Universal history, as well as Academy Award-nominated Despicable Me 2 and Despicable Me 3, which grossed more than $ 1 billion. dollars at the global box office.

Illumination has released two additional original properties that wowed audiences around the world: The Secret Life of Pets, which achieved the best premiere for an original film, animated or not, in American history, and the worldwide hit, Sing. . In 2018, Illumination’s Dr. Seuss’s The Grinch had the largest opening weekend of any Christmas-themed movie in history, followed in June 2019 by The Secret Life of Pets 2. Upcoming Illumination Movies They include Sing 2 in December 2021 and Minions: The Rise of Gru in July 2022.

Universal’s Games and Digital Platforms group leverages the vast portfolio of IP and characters from NBCUniversal. The Games and Digital Platforms group is a business unit of Universal Brand Development, which is chartered with globally expanding the company’s intellectual properties, franchises, characters, and stories through innovative physical and digital products, content, and consumer experiences. The company’s extensive portfolio includes properties created by Universal Pictures, Illumination, DreamWorks Animation, and NBCUniversal Television and Streaming. Universal Brand Development is part of NBCUniversal, a subsidiary of Comcast Corporation.