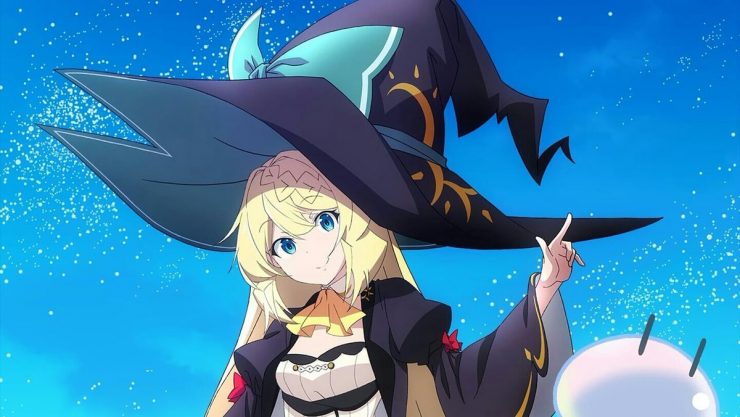 Kisetsu Morita, who has been serializing in becoming a Novelist since June 2016, 300 years after defeating slime, has reached level MAX without knowing it TV animation has been on air since April 2021.

In this work, a woman in her twenties who works as a “company slave” reincarnates in a different world as the 17-year-old immortal witch Azusa.

If you continue to defeat slime for 300 years while living a slow life, you will be able to use all kinds of magic at the highest level thanks to the experience value of doubling skill.

Leica of the Red Dragon, Flat Rute of the Blue Dragon, Harukara the Dispenser, Rosalie of the Ghost, Beelzebub the Demon King, Shasha and Falfa of the Slime, etc. come to such a witch’s house and lead a fun life as a pseudo-family.

Even though they are dragons and slimes, they usually have a humanoid appearance, and they are all women.

However, there is no love element between women. There is basically no romance between the main characters, women, and men.

It’s not that there are no men in another world, but only women who live with Azusa and get involved in major events.

It can be said that it is a series of comedies with a short one-episode, written with the flavor of a different world that is a system of interacting with girls like Houbunsha’s Moe 4-frame.

For example, if you go to the World Tree in the demon land to get an antidote for poisonous mushrooms that make you smaller, it is completely a tourist destination and has an elevator, but it costs money to use. However, wild monsters are accustomed to visitors.

What’s more, when I tried to buy what I was looking for at the pharmacy on the 108th floor, the ones that Azusa had seen were on sale, and a certain character flew by Wyvern and came to deliver it-I didn’t have to climb the tower in the first place. The story of comical development is unfolded with the blurring of each character.

A world where suffering has been removed from the labor

In this work, the true intentions and desires for labor are leaked, and the social situation is reflected.

Azusa died from overwork in her previous life, and before someone recognized her job.

In a different world, I avoid trying to be called great by someone, but I think I’m glad to be praised.

Azusa, who was to live with Leica after fighting because she was sold a fight, refrained from the memory of death from overwork and stopped Leica trying to build a house all night.

In this way, we draw a world where workstyle reform and work-life balance are completely realized.

Also, Pondeli, who has been undead for 40 years, says I miss my playmate Beelzebub says Move to the demon land but you can not get it unless you work the moving cost. However, I don’t like working, so Azusa proposes to do a playing game shop.

This kind of making play a job is a world where the values ​​of “living by what you like, which is often denied as “the world is not so sweet”, are realized.

In the first place, it is a word that starts with I want to live like a slapstick when I become immortal and Azusa does not need to work.

The retreat of sexual love and praise of pseudo-family

This work has romance and sexual retreat in a different world fantasy (book Ranobe) originating from the web, and praise of pseudo-family intimacy, which is remarkable in popular works from the late 2010s to the early 20s. And “adult” readers have come to enjoy it mainly. Because adults read it, those with a desire for labor are supported.