An anime scene at the exit of Nana Road has become a check-in place. Traffic control reminds the public to be safe when taking pictures 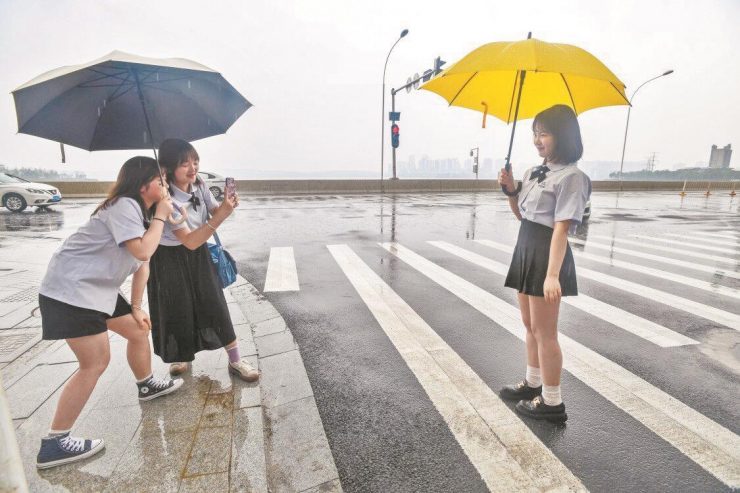 Jammu News from Chutian Metropolis Daily (Reporter Zhou Zhitao, Correspondent Li Tao) In the past few days, Wuhan has been rainy and rainy, but at the intersection of Wenhui Street and Ankang in Hongshan District, citizens lined up on the sidewalks.

Because it resembles the Kamakura scenery in the Japanese animation “Slam Dunk”, this intersection has become popular on the Internet recently, attracting many citizens to check-in, and even take pictures and live broadcasts in the middle of the road.

“At the end of Ankang Road is Little Kamakura in Wuhan.” On the morning of May 19th, Liu Muyu, a girl working in Wuchang District, took the time to take pictures with her friends at the intersection of Internet celebrities. Liu Muyu introduced that she learned about the location of this internet celebrity intersection through a short video shared by netizens.

Ankang Road extends from Xiongchu Avenue to the south. The low houses on both sides of the street come to an abrupt end when they reach the intersection of Wenhui Street. The iconic traffic lights and street lights are in front of the South Lake with blue waves and the Lion Rock in the distance. Such a scene makes Liu Muyu feel very beautiful. In the light of rain, she stayed at the intersection for more than half an hour to shoot.

He Chen, who works in a neighborhood committee in a nearby community, passes by Wanghong Road every day to and from get off work. He Chen told Jimu News that this intersection was just opened in April this year. It was a construction site before. A few years ago, there were many illegal houses in the area facing the lake. With the progress of the lake management work, the dirty and messy lakeshore. The line has been renewed, the lakeside is full of flowers and green grass, which has become a viewing platform overlooking the South Lake.

With the popularity of this intersection on the Internet, many people come to take pictures and check in every day. The relevant staff of the Hongshan District Traffic Brigade introduced that in order to separate the flow of traffic and people, the traffic control department added an isolation fence in the middle of the road this week. In the next step, warning signs and traffic safety publicity signs will be added at the lakeside of Wenhui Street. The traffic control department also urged citizens who come to check in to take pictures in a civilized manner and pay attention to traffic safety.