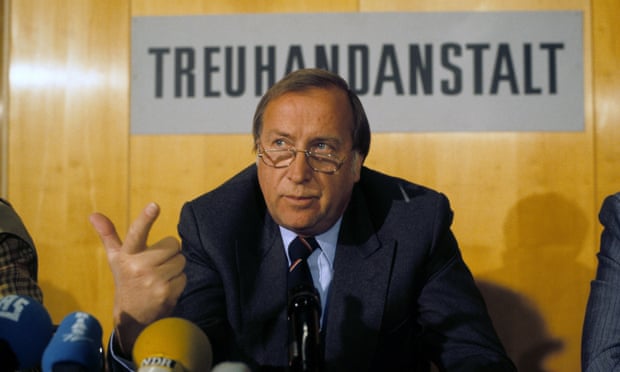 “A Perfect Crime” is a German drama docuseries telling the story of the murder of German businessman and politician, Detlev Rohwedder, who died from a fatal gunshot wound at the hands of a sniper. Rohwedder was the chief of the East Germany Privatization and Restructuring Agency, the post-unification state entity in charge of the liquidation of worthless assets dragging the economy.

Detlev Rohwedder was a controversial figure, seen from the West Germany side as an efficient manager and from the East German side as a merciless job-slashing corporate agent. His assassination at his Düsseldorf home shocked German society. The documentary was directed by Jan Peter, Georg Tschurtschenthaler, and Torsten Striegnitz.

The makers of this German production interview key players and stakeholders of the troubled times that represented the unification of Germany. At the time, the East German economy was a timebomb, the communist-ruled country had a massive, unproductive workforce that caused a giant drag on the economy, millions of workers around East Germany lost their jobs at the hand of the Treuhand, the privatization board headed by Detlev Rohwedder.  This docuseries focuses not only on the criminal science investigation of this cold case, but also on the lives of the East Germans, who saw their lifestyles change dramatically after West Germany took over the means of production and began to develop massive restructurings and layoffs.

“A Perfect Crime” puts the blame on the notorious communist subversive terrorist group called the “Red Army Faction”, but as soon as the viewers watch the documentary, and the careful analysis of the evidence presented, and the incredible fate that the chain of custody of evidence suffered, the audience will soon learn that the investigation ended up a cold case.
Detlev Rohwedder was killed by a sniper rifle in his home on Düsseldorf the night of April 1,1991. Near the crime scene a note signed by the Red Army Faction took responsibility for the murder. As we will see in the four chapters of this miniseries, Rohwedder’s murder could have been avoided, and many hypothesis on how a chain of events took place will lead us to understand that despite the Red Army Faction’s note is legitimate, no one in the rank and file of that organization knew about the plot.

Rohwedder wanted to leave his post at the privatization board in early December 1990, Theo Waigel (interviewed in this documentary) made him change his mind. Four months later, Rohwedder lay dead on a pool of blood at his home. Rohwedder had received different threats, and his house was under surveillance, it even had bulletproof windows, but these were only in the ground floors.

The shooter has never been identified, and this murder is one of the most controversial in the contemporary history of Germany. The documentary was released a week prior to the celebration of the German Reunification Day, October 3. This production is ther first German documentary film directly commissioned by Netflix United States.

The series runs at a total of four chapters of one hour length. Each chapter takes an extensive look at the circumstances behind Rohwedder’s murder and identifies three probable suspects for the killing: First is the Red Army Faction, who claimed responsibility in a letter left at the crime scene, then there’s former members of the Stasi, East Germany’s intelligence branch, and last, but not least is the West German “deep state” who might have used the RAF as a cover up.

This documentary is a very exciting work, that leaves the audience thinking about what happened, and what could have been done to prevent this death. Wih a broad range of interviews with the investigators, former Red Army Faction members and politicians.

The documentary is available on Netflix.