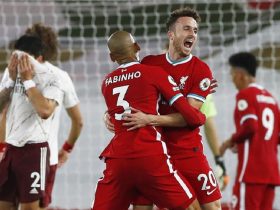 Liverpool Vs Arsenal – Who Won? What You Missed?

In June 2013, a group of researchers from the Catalan Paleontology Institute received a call from a group of people in the Coll de Nargó region of Spain, a tiny town in the Pyrenees of Lleida, notorious for the number of fossil remains of dinosaurs. The scientists went to the location and found a never-seen-before fossil remains—a full skeleton with well-preserved bones. The subsequent excavation of the precious fossil ensued, and because of weather conditions, the project was briefly paused, covered with unique water-resistant material.

The next day, when the paleontologists went back to the digging site, they were amazed to see that the fossil was gone, the protective material had been removed, and the precious fossil wasn’t there. The researchers called the police, an investigation began, and they concluded that the object had been stolen.

Nearly a month later, police investigations landed with the thief, a sixty-year-old man who took the precious fossil. Once recovered, the priceless piece has significantly deteriorated. What was once a whole skeleton in rock was now fragments. Spanish law forbids the sale of fossils, so it makes no sense that the thief would take the crocodile’s ancestor’s remains.

The fossil was in a government warehouse under embargo for two years as the trial went. Once the judicial process concluded, the fragmented skeleton made its way back to the Catalan Institute of Paleontology. After nearly two years of putting the fossil back together, in 2017, they began to study the nitty-gritty details of how that ancient animal would have looked in its days of thunder.

What they found was a small land crocodile never-seen-before; they named it Ogresuchus furatus  —Latin for “Stolen Ogre Crocodile.” This animal roamed the earth about sixty-six million years ago. Further analysis of the specimen indicates that this is the eldest specimen ever found of the sebecidae family. A finding that challenges evolutionary paleontologists on theorizing the origins of the crocodile family.

Unlike modern crocodiles, sebecidae —, their ancient cousins— had their legs under their bodies, an anatomic peculiarity that allowed them to move in ways similar to modern mammals and made them also very active predators. Measuring nearly 80 centimeters, that animal wasn’t big in comparison to other species of its genre. Crocodiles and gators are enormous: The Orinoco Crocodile measures almost 6.8 meters and is autochthonous in the American continent, —more specifically, the Orinoco river basin between Venezuela and Colombia,— not Europe.

This fossil finds also sheds light on how the Iberian peninsula acted during the formation of the earth as a bridge between northern and southern continents. This new crocodile reveals a connection made millions of years ago, way before scientists expected.
The reptile fossil found in Spain had sharp teeth —a carnivore predator— that could feed itself from youngling dinosaurs, so while not able to hunt down more extensive, more adult animals, it ate other species’ younglings.

The Coll de Nargó locality in Catalonia, Spain, is one of the country’s most rich fossil deposits in the Iberian peninsula and it is probable that after these findings, we’ll likely discover more of these fascinating specimens as scientists study the origins of life on the planet Earth.