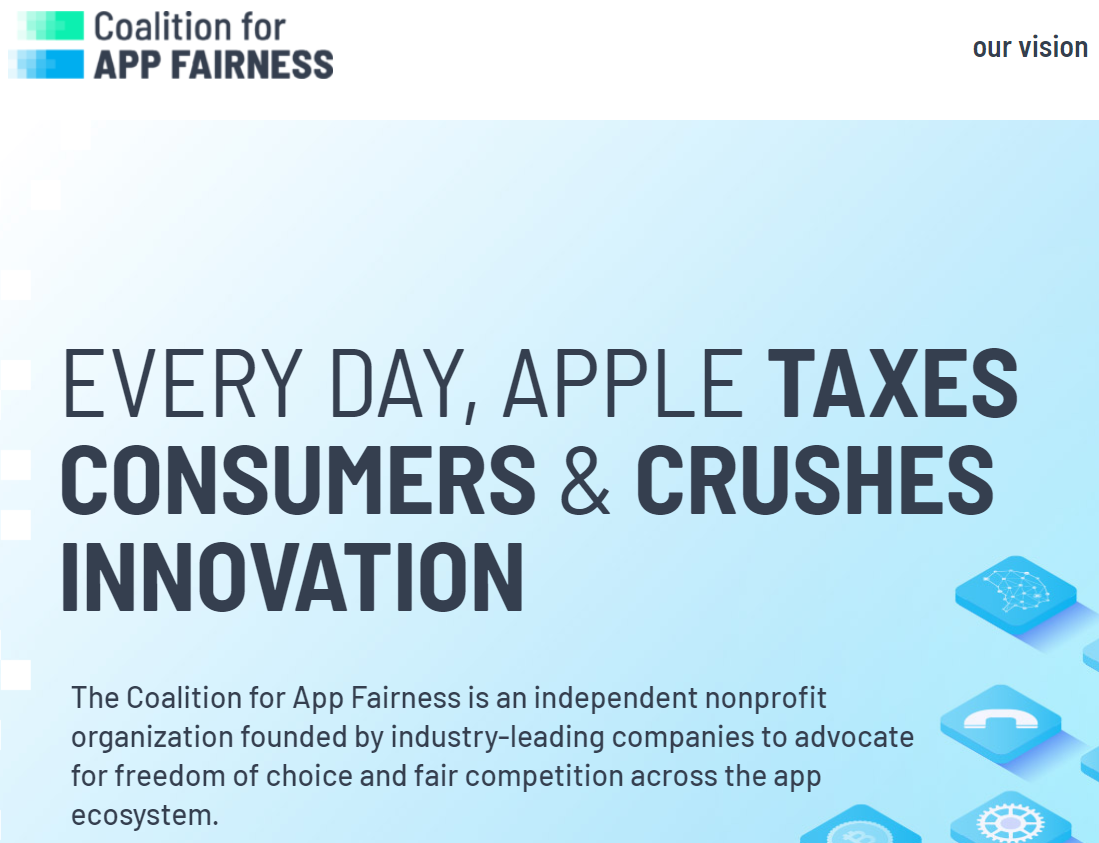 The newly-formed Coalition of App Fairness aims to tackle Apple’s App Store policy, the group includes major players in the entertainment industry like Spotify and Deezer, cybersecurity platforms like Protonmail, and the controversial gaming platform Epic Games, owned by Tencent Games. Chinese Communist Companies have a lousy track record in transparency because they function in an utterly corrupt legal environment crafted by the Communist Party, whose laws force companies to collaborate with Intelligence authorities in the mass-surveillance program that the Asian nation conducts on its citizens and projects into the world with their spyware-rife apps and platforms, claims strong enough to trigger the White House —just glance at the WeChat & TikTok bans.

The Coalition for App Fairness is a non-profit group aiming to level the commercial relationship between Apple’s App Store policy and software developers. Formed by over a dozen developers and companies that claim that Apple’s policy hurts them and their customers. This is a clever public relations move that goes in-sync with Cravath, Swaine & Moore’s attempts at a California court where Epic Games is suing Apple for the Fortnite controversy. The prestigious law firm has Christine A. Varney, a veteran antitrust lawyer —and hardcore democrat party member, having served for Bill Clinton & Barack Obama in the DoJ—representing Chinese companies’ interests in US soil.

The coalition claims that Apple’s ecosystem and payment platform is a monopoly that hampers creativity, they cry “shame” at Cupertino’s profit scheme and claim that Google also takes unfair advantage of a system that’s supposed to serve the customer. Well-crafted, perfectly doctored arguments are available in the coalition’s website, while some cases hold water, the Coalition for App Fairness doesn’t touch a crucial issue to today’s apps ecosystem: Privacy. And the reason that lobby won’t touch with a ten-foot pole the security aspect of the app ecosystem is because they’re not going to shoot themselves in the foot when messing with their Chicom Sugar daddies who are eager to collect data to feed a social credit score system, and influence via soft power the daily lives of billions of people.

For Apple, competitiveness is a key issue, the same for Google, both tech giants —who develop iOS and Android respectively— have had their issues regarding privacy and competition. They match head-to-head in their respective businesses and each company has their agenda, a perfectly understandable position. It’s the customers that are —in one way or another— the ones that have to pay the ultimate price for this corporate tug-of-war.

Apple’s prerogative to tax 30% on profits for the App Store is a recurrent thorny topic in the world of tech developers, the Coalition for App Fairness wants to review Apple’s successful model with heavy social justice warrior rhetoric and criticism from none other than Tech companies agglomerated: Just what we needed. More billionaires claiming oppression in a world where the public is subject to their whims as other social problems arising from the ever-growing lack of privacy loom in a future that was supposed to look like the Jetsons and it feels like a bad day on the 2019 of Rick Deckard’s Los Angeles.