The president of the United States of America, Donald Trump was booed this Thursday when he, joined by First Lady Melania Trump paid their respects to the late US Supreme Court Justice Ruth Bader Ginsburg, who passed away last week. “Vote him out!” cried the public as the President, faithful to his institutional stance paid his respects in the final good-bye to one of America’s most progressive Supreme Court members.

The coffin that holds Ruth Bader Ginsburg remains on an ardent chapel in the Supreme Court of the United States, an institution she served as a magistrate for twenty-seven years. On Friday, the coffin will be moved to the United States Capitol prior to her burial at Arlington National Cemetery.

The Trumps went to pay their respects in the customary black mournful attire, wearing facemasks and remained for a few minutes standing next to the coffin which was covered by the stars and stripes flag of the United States. Shouting here and there was reported, including a cry for “Honor her wish!”, in reference to what allegedly  Ruth Bader Ginsburg said to her son on her death bed, wishing that the vacant seat at the United States Supreme Court be filled prior to the November 3 election.

President Donald Trump announced that he will name a replacement to Ginsburg despite the proximity of a hot US election. In the American system, magistrates serve the Supreme Court do so for life, there’s nine of them and when a vacancy occurs, its up to the President of the United States to nominate a new magistrate, that nomination goes to the United States Senate, once approved, the nominee will occupy for the remainder of their life a seat in the Highest Court of the US. 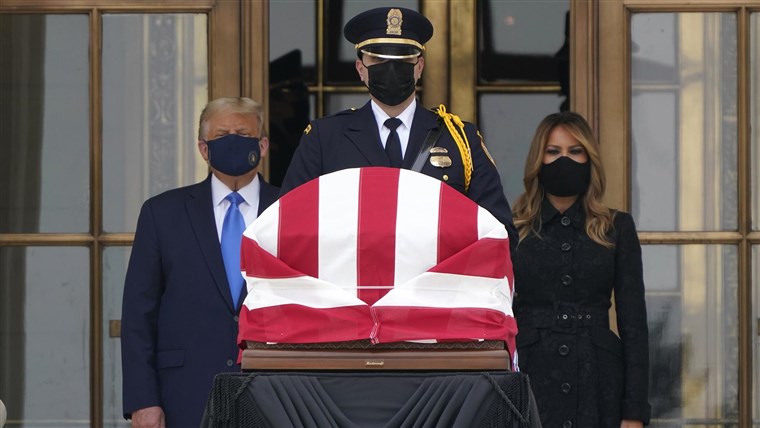 Four years ago, the Republican-controlled Senate refused to confirm a Barack Obama nominee arguing that it was an electoral year, now, with a Republican president in the Oval Office running for the re-election, the criterion seems to have —conveniently— changed, and it all seems that with a simple Senate majority, the newly appointed Judge will take Ruth Bader Ginsburg’s seat. Trump compromised and said that he will nominate a woman to the spot and will announce the world the name of the candidate this Saturday.

Bader Ginsburg’s substitute will be a conservative-leaning judge, and a smart political move prior to the crucial November 3 election that confronts the Donald Trump / Mike Pence ticket for the Grand Ol’ Party against the Joe Biden / Kamala Harris ticket on the Democratic party side in an election that has its peculiarities: Voter suppression, divided parties —democrats have to deal with the radical left, and republicans have to go at clever Public relations talking points to buttress a troubled presidency—, a poorly local state legislature handled coronavirus spike —which demagogically the democrats pin on Trump, despite being local governments the ones in charge of key Covid tackling aspects— , the claims of foreign meddling —Russia always the threat—, treatment of the press, social unrest —with an Israeli-financed Black Lives Matter movement—,  and a tanking economy.